This is an attempt to document my efforts to grow and eat locally around Melbourne, Derbyshire. My family own a nine acre smallholding on which we grow fruit and vegetables and keep bees, and chickens, but that won't feed us alone, so the idea is to get to know our local produce and to see how easy/hard it is to follow a diet that is local to within 30 miles. The fun part is also trying some new (easy) recipes that use home-grown and local produce. Feel free to comment, send in recipes, and share your experiences of buying and eating locally. 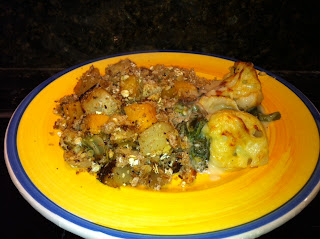 Served with cauliflower and broccoli cheese. The crumble is a River Cottage recipe.
Posted by Sarah at 11:52 No comments:

Email ThisBlogThis!Share to TwitterShare to FacebookShare to Pinterest
Labels: Mains 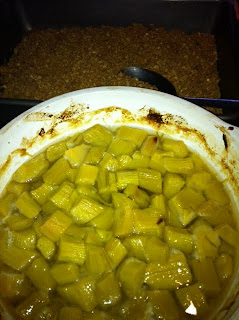 This is stewed rhubarb with a separate oat crumble topping, which is a really great way to stop the topping going soggy. The rhubarb is home-grown.
Posted by Sarah at 12:33 No comments:

Email ThisBlogThis!Share to TwitterShare to FacebookShare to Pinterest
Labels: Desserts 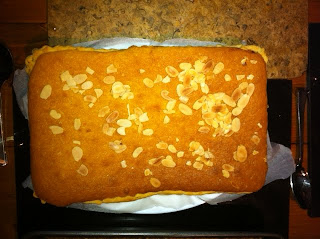 I gave my friend Pam a dozen of our eggs and she returned with a gorgeous Bakewell Tart. What a great swap!
Posted by Sarah at 12:28 No comments:

Everyone's favourite, cooked by my mum. The chicken was a Packington chicken from Chantry Farm Shop and veggies were local or home-grown. We always eat it with home-made redcurrant jelly, stuffing and gravy.

Sent from my iPhone 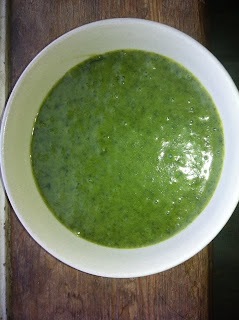 I went to Ticknall Garden Club's plant sale this morning and they had wild garlic on sale, picked locally this morning. So for lunch we had wild garlic soup, which was made in 10 minutes by just frying a chopped onion in butter until soft and then adding a large potato and a colander full of wild garlic. I then added water to cover and two teaspoons of veg stock powder. I simmered until the potatoes were soft and then liquidised. The result was a tasty soup and not overpowering as you would expect.
Posted by Sarah at 05:25 No comments:

Email ThisBlogThis!Share to TwitterShare to FacebookShare to Pinterest
Labels: Soup 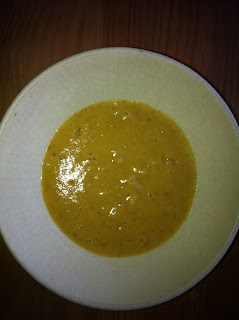 I made this soup to take as a starter to a dinner party. Served with rolls, it's quite rustic but tasty and rich. I made the veg stock myself which is probably why the soup looks a bit more orange than it should! The parsnips were grown by Heaths.
Posted by Sarah at 10:31 No comments: 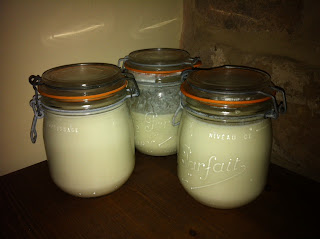 I made yoghurt last night in the slow cooker. I found recipe and idea online and it was dead easy to do. I sieved it and bottled it up into 3 Kilner jars. The milk and the yoghurt starter I used were local and I used milk that was on its sell-by date and was reduced in Scaddows farm shop.

Here's the recipe which was provided by http://www.blottedcopybook.co.uk/the-good-life/

You will need:
A slow cooker
Milk (I used a 2.2l jug of semi-skimmed)
Optional: One cup dried milk powder
A small pot of plain live yoghurt (you need this as a “starter”)
Storage for your home-made yoghurt.
One word of advice – there are long periods of leaving things to work while you’re making yoghurt. Personally, being a bit of an old fart I don’t like pottering around in the kitchen late at night so leave five hours before you go to bed to start this off. I wouldn’t kick this off any later than 5pm at night.
Before you start, make sure you have appropriate storage for your yoghurt. I sterilised a few 1l kilner-type jars (available from Ikea for 89p each or Lakeland for £14.99 per half dozen) and since we expect to use this yoghurt quickly this size of jar works well for us. I wouldn’t sterilise your storage until about an hour before your yoghurt will be finished.
Take out your slow cooker (I have a Morphy Richards 6.5l one which I’ve found here for £29.99) and turn it on to the low setting. Pour your milk in (if you’re using milk powder add that now & whisk), pop the lid on and leave it for three hours.
After the three hours, switch your slow cooker off. Take your pot of natural yoghurt – this will be your starter – out of the fridge and leave the yoghurt and milk for a further two hours.
After two hours, add your yoghurt into the milk working quickly so as not to cool the milk down too much. Replace the lid of the slow cooker and cover the slow cooker with towels then leave it overnight for a minimum of eight hours.
When you wake up, sterilise your jars and allow them to cool before adding the yoghurt – you don’t want to kill off the good bacteria, not least because if you want to make yoghurt again then you’ll need a decent cupful of this stuff as the starter for your next batch! This will safely keep in the fridge for a week or so.
Posted by Sarah at 02:22 No comments:

I always knew that the shopping was going to be the most difficult part of this challenge, not least because I hate shopping.  I have been known to make a meal out of absolutely nothing in the store cupboard, taking a long time in the process, rather than get in the car and head to the shops down the road.  My first stop was Heath's farm shop at Woodhouses, which was closed on Tuesdays - so far so bad, then went to Diana's kitchen on Melbourne common, which had some local veg (although I only knew it was Melbourne veg by reading their website, so I hope it was correct), and bought carrots, swede and parsnips.  I then headed to Scaddows farm shop where the fun began, reading labels and trying to decide where each item was from, and whether its ingredients were from the same place as the company on the label.  I knew that I would have to keep things simple, but even straightforward ingredients such as flour were difficult.  The mill in a local(ish) Leicestershire mill,  Claybrooke Mill, but each different flour had a different origin (the plain flour said it was from the UK), but no region of origin of the wheat - I think I need to do a big more googling.  The stilton was from the Vale of Belvoir which is relatively local, as far as cheese goes, but when I got it home it said it was packaged by a company in Kent - does that mean packaged in Kent?  This is obviously going to be a bit more difficult than I thought.  Even the veg in Scaddows wasn't straightforward.  The lady said that they get it from the wholesale market in Birmingham and that the Melbourne growers send their veg there, but I don't want my veg to take a trip to Brum before it ends up on my table.  I know it's a bit early for a lot of stuff and they were advertising for asparagus pickers so they do grow their own (and fruit too) but I'm going to have to watch out and not fall into any traps of thinking that farm shops sell only "local" produce.
Posted by Sarah at 12:51 No comments:

Email ThisBlogThis!Share to TwitterShare to FacebookShare to Pinterest
Labels: shopping 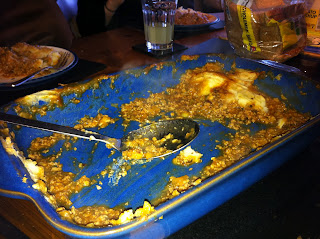 The meal was a success - I made this with local pork mince - Ok so it wasn't truly a "shepherd's" pie.  I also added some grated swede, carrot and onion and some soya mince to make it go further, cheaper and less of a meat footprint.  Homegrown ingredients were leeks, garlic, herbs and home-made rhubarb wine, local ingredients were the pork, carrot, onion, swede and potato, and non-local were tomato puree, soya mince, soya sauce, worcestershire sauce and veg bouillon.  The meal today was definitely within the 80% local boundary.  It took a long time to cook and prepare the main and pudding, but I made enough for tomorrow's dinner too, so that's a big time saving. 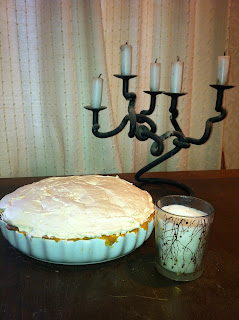 As I took a bite out of the delicious gooseberry meringue pie, the flavour sparkled in my mouth. As I gulped down the soothing pie many spectacular tastes entered my mouth. I totally recommend the ornate recipe and hope you try it yourself. By KS

As you can see my son was taken with this recipe - the only positive reviews I've ever had for a gooseberry recipe!  Here's the recipe: 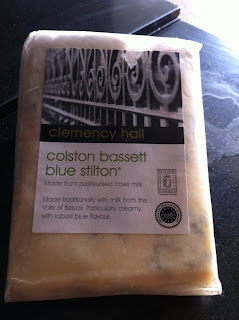 Ok so this isn't going to be easy! I bought Stilton from Scaddows Farm Shop today because it's from the Vale of Belvoir which is not too far away, and then I read the packet that it's packed by a company in Kent!! I'm not even that keen on Stilton.
Posted by Sarah at 06:04 No comments: 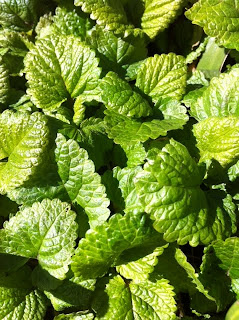 I reached for my packet peppermint tea without thinking this morning and then remembered that lemon balm from the garden makes a lovely refreshing herbal tea. I just added hot water to a few leaves.
It's dead easy to grow too, and best grown near the house so the leaves are at hand when you need a cuppa.
Posted by Sarah at 04:07 No comments: 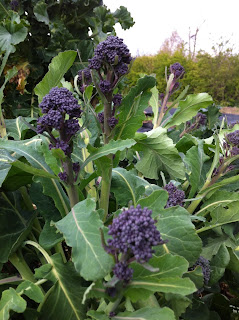 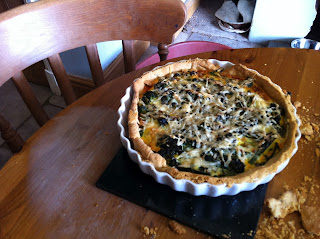 We ate this with jacket potatoes.  The cheese wasn't local - yet!
Posted by Sarah at 08:04 No comments: